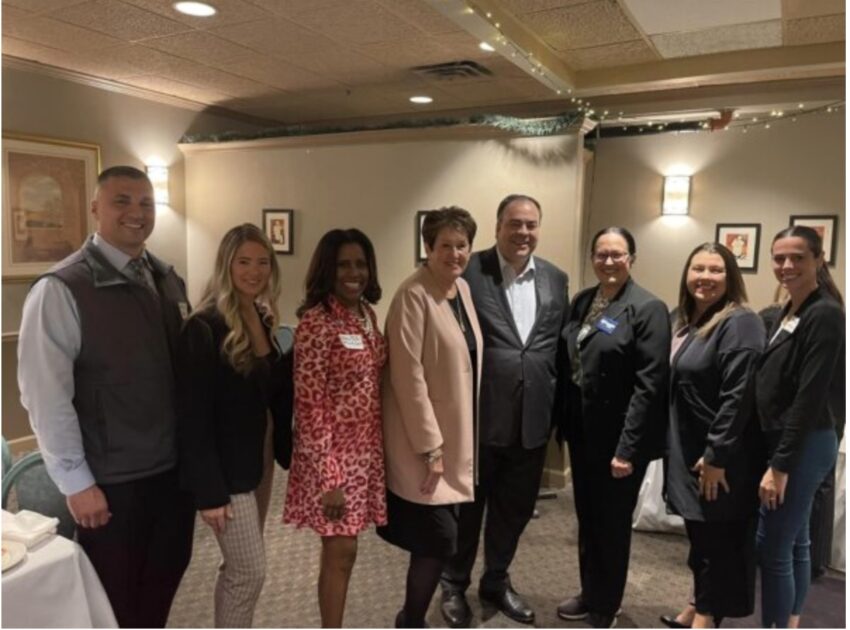 “I want to welcome everyone here to this great turnout of Democrats for our organization and candidates,” said Beth McElroy Kirkwood, the Democratic Committeeperson for Orland Township in opening the packed meeting. 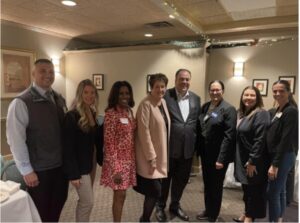 “We have really strong and qualified candidates and our voter base continues to grow in Orland Township.”

Kirkwood reminded everyone that early voting begins on October 24 and urged them to come out and vote.

Key issues discussed included defending the rights of women which are being challenged by Republican Party extremists to eliminate the right to abortions, and the effort to reinforce democracy principles to ensure that everyone’s views are respected and not trampled by rightwing extremists.

“This is a symbol of the South Suburbs being united. I don’t ever recall where everyone has been in one room together. A strong Southland means that people have to come here and explain to us why they want to get elected to office, whether you are a state senator or a governor. All roads to Springfield comes through the South Suburbs,” Hastings said kicking off the forum.

“Everyone says this election is going to be the most important election. This one is. Why is it? Because it is a start of a new legislative cycle. Ten years, we just redrew the maps. Every single legislator is up. Every single office holder is up whether you are in the General Assembly, all the way to governor. All the judges are up for retention.

Hastings added, “We have a supreme court race that is probably one of the most important supreme court races that we have probably in two or three decades. Why is it important? Because every woman in this room who wants to make your own choice for your own health care decisions, you should support candidates who support your views. Second, if you want to make sure to keep illegal guns are kept off of the street, you want to get people elected who believe in that same thing. If you want to get mental health services in the south suburbs — for some reason when Rauner was the governor, all those services got cut. That’s why we have to get people elected who have good ideas and similar views.”

In addressing the packed audience, Kaegi thanked the Democrats of Orland Township calling the event “an awesome turnout.”

“For the first time, Senior homeowners’ exemptions now renew every year. You don’t have to recertify every year,”Kaegi said noting that in the past seniors had to file renewals every year causing many to lose their exemption benefits which reduce property taxes.

“You are still 65. Last year was the first time in over a decade that the average homeowners tax bill fell in Orland Township because of the work we did in making sure the biggest taxpayers paid their fair share. And for the first time you have an Assessor who doesn’t take campaign contributions from property tax appeals lawyers who practice before our office.”

Kaegi noted his office has received national and state awards for the services of his office during his first term in office.

“I am excited to be on this board with these two dynamic women,” Spyropoulos said during her remarks, acknowledging remarks made by Brown and Flynn.

“We have worked really hard throughout the county, Thank you to Orland Township Democrats for all that you have done for Democrats.”

Donna Miller who is running for re-election in the 6th District expressed her gratitude for Democrats in Orland Township for supporting her office over the years. Miller represents 36 municipalities in the 6th District and she said that the South Suburbs deserve their share of county services, funding and representation.

Miller joined with all of the women candidates in the Township who said they supported Hastings whi has been the target of attacks from controversial lobbyists and rightwing conservative extremists.

Calandriello, who is seeking to unseat controversy-plagued Cook County Commissioner Sean Morrison in the 17th District, also thanked the officials and voters for supporting his candidacy.

“We need to get out to vote. I am running against the chairman of the Cook County Republican Party, a person who doesn’t believe in public service and who is all about himself,” said Calandriello, and Orland Park native.

“Thank you for coming out to support the organization.”

Monica Gordan, the Democratic nominee for the 5th District which is split between Chicago and the suburbs, expressed her gratitude for the support. “I am so grateful to join the 17 member board and fight for equitable healthcare, public safety, economic development. When you think about county government, for a lot of people, it is their last resort.”

Gordon, also the Bloom Township Democratic Committeeperson, said she supports the right of workers to receive a fair wage and to also fight to enhance and expand services in the forest preserve district.

Illinois State Rep. Justin Slaughter warned that “everything is on the table” and stressed that women and Democrats must come together to protect their right of choice and to also fight for “sensible gun legislation.”

“There are folks that want to turn the clock back and go backwards,” Slaughter said. “We’re talking about decades of work that the Democrats have put into where we are at right now.”

Rita said voters must elect Democrats to ensure that funding continues to flow to communities for their programs and services, funds that Republicans have threatened to cut and block.

Click this link for information on Judicial Retention candidates.

Click this link for more information on the Orland Township Democratic Organization.